The Statistics Are Staggering 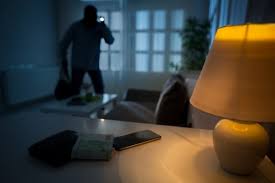 According to the FBI’s most recent statistics, there is a reported robbery every 1.6 minutes in the U.S. and a burglary every 18.2 seconds. This equates to more than three burglaries every minute, 198 every hour, and 4,608 every day. The cost of property crimes is estimated to be worth $14.3 billion.

The FBI defines a robbery as “the taking or attempting to take anything of value from the care, custody, or control of a person or persons by force or threat of force or violence and/or by putting the victim in fear.”

A burglary is defined as including unlawful entry. This can include thieves gaining access to your home or office through forcible entry, unlawful entry, or attempted forcible entry.To understand how these statistics affect Americans, SafeHome.org researched the FBI Uniform Crime Reporting (UCR) data to determine the items thieves most commonly targeted.

The most stolen items each month across the United States are, by category:

When under the stress of having just been robbed or burglarized, it will be extremely difficult to remember all the items you owned. A photographic and written report of your belongings will help you file a claim and receive an equitable settlement. Serial numbers will prove recovered items are yours. Photos will help identify jewelry pieces. Having a home and business inventory is a wise investment, and most likely the cost of an inventory service will be less than one forgotten item when filing a claim.